It’s one of the best hockey sticks for midfielders and defenders who want to do the basics really well, and get the extra edge in a 50:50 tackle.

The Young Ones ADB 70 Hockey Stick has a range of technologies available, including a reduced head design and balanced toe to improve 3D skills and reverse lifting. The Advanced Dribble Bow is a specially designed stick bow to assist players with the general aspects of the game – hitting, slapping, pushing etc. The mould doesn’t have any specific technologies which are for a certain player type, which makes this a great stick for all aspects of play.

This stick has a carbon percentage of 70%, which isn’t too stiff, but gives it a nice level of flexibility. It’s a great blend between power and flexibility, and this hockey stick is one of the best at doing that. The flexibility is noticed when slapping or hitting, where the stick gives you a little extra whip in your shot. If you want a stick with pure power, then you’ll probably need to up your budget and pay for a stick with a higher carbon percentage. But, if your game doesn’t involve heavy hitting from the back, or standing on the top of the D and banging it into the corners, then 70% carbon may be all you need.

This hockey stick is best suited to those looking to do the basics well. Those players who generally don’t take risks, or need to take players on. If you’re a classic showboater or flashy hockey player that loves the 3D skills, then this stick isn’t for you. The Advanced Dribble Bow will ensure you get the basics right. It’s for the workhorses of the team who move the ball quickly and can put the tough tackles in. It’s a very solid stick which will give you that extra edge in a 50:50.

There has been a lot of thought put into the design of this hockey stick. It’s dark blue colour covers the whole stick and has a great finish. The blue is a little darker than you’d like, but apart from that, it looks great.

At an RRP of £159, this hockey stick is moderately priced. It has a good balance of technology, power, and versatility putting it amongst one of the best priced hockey sticks for midfielders and defenders.

y1hockey.com
£159.00
See it
Last Amazon price update was: March 10, 2020 8:02 pm
× Product prices and availability are accurate as of the date/time indicated and are subject to change. Any price and availability information displayed on Amazon.com (Amazon.in, Amazon.co.uk, Amazon.de, etc) at the time of purchase will apply to the purchase of this product.

We are here to Reinvent The Game. Try something new, think outside the box. Hockey needs a shake up and that's exactly what Y1 Hockey here to do. Join the ... 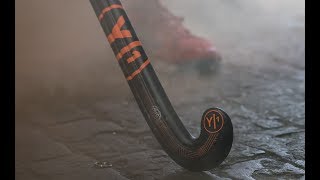 There are no reviews yet.

Hockey Hippo is a participant in the Amazon Services LLC Associates Program, an affiliate advertising program designed to provide a means for sites to earn advertising fees by advertising and linking to amazon.co.uk

Sign up to receive the information about the best field hockey sticks and accessories available.